Start a Wiki
Up In The Air is a comic series featuring Patty and Charlie. It is created by Tmaneea and is posted on his Deviantart account. It can be viewed in its entirety here.

Up In The Air Cover 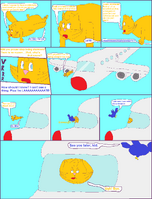 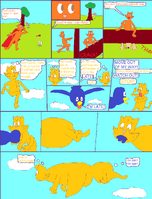 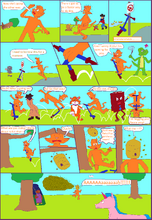 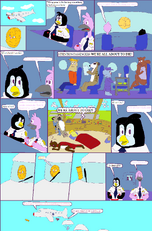 Add a photo to this gallery

Patty adrift in the air. In the background are Charlie with a jet pack, the Blue Bird, a red kite, the UFO, a superhero, and a hot air balloon.

Patty and Charlie arrive at Calamity City Park. Patty asks to ride the see saw. After Charlie place Patty on one side, Charlie goes to sit on the other, launching her up into the air.

Also at the park are the Blue Bird sitting in a nest in a tree on his laptop, Ashley playing with Adam as a ball, Justin on a slide, An angry bear throwing away a flattened and crumpled Billy, RoboHound, Flat Lizard on a sidewalk, Mad Rabbit, shooting a ray gun, a wolf trying to catch a chicken, and a Lost Log Flier.

Patty being launched into the air as Charlie watches from below.

Charlie goes after Patty. He attempts to climb a tree, but topples it over on top of an unsuspecting dog.

Meanwhile, Patty comes across the Blue Bird flying in a hurry. As Patty screams, she accidentally swallows the bird, taking his shape.

Also in the page are a strange man, a single shoe, and a man sitting on a cloud.

Patty and the bird fly into a jet plane, freeing the bird and flattening Patty against the windshield.

Charlie still attempts to go after Patty. He steals a pogo stick, but it goes haywire. He crashes into a tree branch, knocking down a bee hive, which lands on his head. He is then chased by a swarm of bees.

Also in the picture are the still crushed dog from page 3, a lost gopher, a pirate, 3 ducks in a pond, a young elephant, a gator chasing a butterfly, A mysterious cloaked man, Taijey, Mr Help, Ollie, and a pink unicorn.

Two pilots, Clyde and Dale, notice the flattened Patty on their windshield. They discuss what to do about it, including panicking their passengers and informing the traffic control tower, filled with sleeping controllers. In the end, they activate the windshield wipers, rolling Patty up into a tube and sending her down towards the ground, while all the passengers abandon the plane.

Also in the page are a random man, Miku, a koala flight attendant, Fragile The Squirrel, Harvey, Yuzu, a sleeping traffic controller, some guy's feet, and various skydivers.

Retrieved from "https://calamitycity.fandom.com/wiki/Up_In_The_Air?oldid=4321"
Community content is available under CC-BY-SA unless otherwise noted.