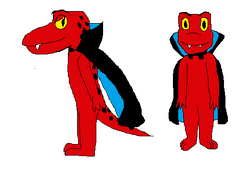 Ricardo is a salamander living in Calamity City.

Ricardo is a small red salamander. He has block spots along his back and tail. He has yellow eyes and black slitted pupils. He has two fangs coming out the front of his mouth. He is usually seen wearing a black and blue cape.

Ricardo is very snooty and believes himself to be better than everybody simply because his father is the mayor and a successful business tycoon. He is rude to everybody and constantly bullies and taunts them.

Add a photo to this gallery
Retrieved from "https://calamitycity.fandom.com/wiki/Ricardo?oldid=4611"
Community content is available under CC-BY-SA unless otherwise noted.