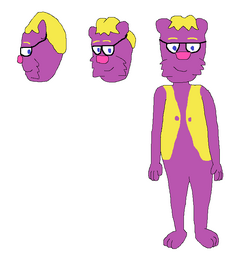 Larry Ferret is a ferret living in Calamity City.

Larry is a purple ferret with gold markings. There are gold markings across his torso that give him the appearance of wearing a jacket. The hair on top of his head is also gold. He wears glasses. He has blue eyes.

Larry is very smart about Calamitology which gives him insight into the way people and the world around him works, giving him the ability to predict future events and manipulate them.

Retrieved from "https://calamitycity.fandom.com/wiki/Larry_Ferret?oldid=4591"
Community content is available under CC-BY-SA unless otherwise noted.