Henry is a brown dog who lives in Calamity City. He works as an actor as well as a director. His friends include Patty, Charlie, and Steve.

Henry was born in Calamity City. He became an actor at Chaos Studios, and eventually broke off into directing.

Henry is a large brown dog. His hair is spiked up. He is incredibly strong.

He's not very bright. He is very literal minded, and doesn't understand the concept of pain. His attempts to help others often causes them misfortune.

Henry is super strong and invulnerable to most injuries.

Henry lives by himself in a small apartment.

Friends And Family (And Others)Edit 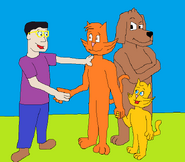 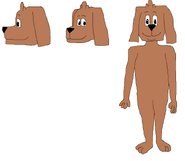 Add a photo to this gallery
Retrieved from "https://calamitycity.fandom.com/wiki/Henry?oldid=4569"
Community content is available under CC-BY-SA unless otherwise noted.