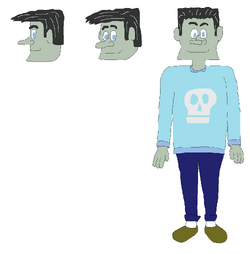 Dr. Smarts was born in Calamity City. After getting his degree in mad science at Calamity City University, as well as minoring in theatre, he became a professor at CCU, as well as a freelance mad scientist, and a part time actor working at Chaos Studios. He lives with his niece, Regina Human.

He is a human scientist.

He is a very despicable person who enjoys seeing others in pain.

He is an educated man with more than a passing knowledge on Toonology. His mad scientist skills are top notch, able to bend the laws of known physics with very little effort. He is also a talented actor.

Regina Human: Niece. He often likes to use her for his experiments. Splat The Cat: His assistant and guinea pig. Justin: Occasional lab rat. Larry Ferret: Colleague at the Calamity City University. Patty: Coworker at Chaos Studios. Henry: Director at Chaos Studios.

Retrieved from "https://calamitycity.fandom.com/wiki/Dr._Smarts?oldid=4579"
Community content is available under CC-BY-SA unless otherwise noted.